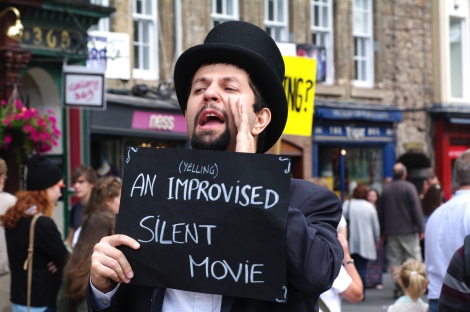 Can I improvise this post? Over-planning can be a dangerous activity. One can spend a lot of time preparing to all eventualities only to become paralysed by the process. Improvisation is also a process, but a more liberating one. In a way, it makes us achieve more and can lead to valuable and unexpected outcomes.

“Life is improvised” would say Dave Morris. In his TEDxVictoria talk The Way of Improvisation he explores a series of points he believes to be essential to the improvisation process.

1 – Play. Engage into something simply because we like it. Play taken too seriously becomes work, and we hate it. We overthink. We live in the future more than in the present; the fun is gone. Play places us in the enjoyable present.

2- Let Yourself Fail. Failing does not make you a failure. Failing can teach you how easy it is to simply start again. We learn to not be paralysed by the failure and it empowers us diminishing our fears.

3- Listening. Listening is the willingness to change. True listening makes you truly present in the moment and takes the ego out of the equation. There is no sense of ‘mine’ and ‘yours’, there are ideas that have the potential to be developed.

4-Say yes. The word yes allows you to keep a process alive. The word no kills the process. Yes is the the fuel to a conversation.

5-Say and. The word and (following the yes). It adds to the current discovery… and is a word of connection. On the way to working with people and

6-Play the game. There are set of rules. The rules give constrictions, a set of boundaries to funnel a creative process into ‘something’

Film production is the art of planning. This does not mean that every single aspect is to be planned meticulously before production can start. A solid pre-production can establish ‘the rules of the game’ but also leave an open door for improvisation. The pre-production stage might be a better ground to let the creatives play, fail, listen, say ‘yes and’, but improvisation seems to often find its way into the set and into the final cut, sometimes creating some of the most iconic scenes or lines in cinema history.

One response to “Let’s Wing It: Improvisation, Film and That Something Special”