Like cinema itself, my love for cinema has been divided between the fascination for ‘reality’ and the craving for ‘fantasy’.  While Méliès chose to embark us on fantastic voyages the likes of Flaherty and Grierson chose to explore the reality of our world instead. The line between fiction and reality is seldom sharp. Mockumentaries exploit the conventions of factual programming to present fiction as reality. Biopics and docudramas ‘steal’ from reality to dramatise real world events. The word realism has been associated with a large amount of different cinematic movements and a multitude of genres have been devised to describe the various realms of human fantasy. We could argue that documentaries claim to describe the real, to tell the truth. Yet, we could also easily argue that many of them do not deliver on such claims. One needs to start by asking a simple question: What is a documentary?

a film or television or radio programme that provides a factual report on a particular subject. synonyms: factual programme, factual film;

I prefer the more poetic definition by John Grierson:

“A Documentary is the creative treatment of actuality.”

What is actuality? Actuality in this case is footage of real events, places, people and things. That’s it. There is no creative treatment of the footage; no creative editing, no creative use of sound, no creative use of the camera, no staging and no directions just a simple raw recording of “reality”, if that is possible. It is what the Lumiere Brothers first started recording, simple actuality footage.

Probably the most popular perspective on the study of documentaries is the one presented by Bill Nichols in Representing Reality: Issues and Concepts in Documentary. Nichols outlines the Documentary Modes of Representation (see an excerpt here) a popular yet debatable way to categorise documentary films based on their organizational patterns. Even though it is inaccurate to think of these modes as historical representations of the evolution of documentary style, as it is wrong to interpret them as being mutually exclusives, they can help understanding the values and problematics attached to various techniques commonly used by documentary filmmakers. If the filmmaker is committed to a statement of ‘truth’ surely he or she would not ‘lie’ to me, right?

The poetic mode of documentary is not concerned with the “objective” reality of a given situation or people and instead aims at grasping an inner “truth” that can only be attained by poetical manipulation. It does not use continuity editing and sacrifices sense of time and location. It explores association and rhythm, and does not concentrate on specific/main ‘social actors’.  Its codes emphasise visual associations, tonal or rhythmic qualities. Its formal organisation favours mood, tone and texture. By presenting a set of images with a specific soundtrack the filmmakers attempt to reveal an hidden truth about the presented media.

Olympia Part One: Festival of the Nations (1938) directed by Leni Riefenstahl’s

But, wait a minute. Are they ‘lying to me’? They are presenting images in an extremely subjective way where artistic expression seems to matter more than a truthful representation of the real world.  We demand the truth.

This mode is what we most identify with the documentary and is most characterised by its ‘voice of God’ commentary. The structure reminds us of the one of written essays. It offers a series of arguments presented by a verbal commentary and supported by visual ‘evidence’. It addresses the audience directly and suggests the preferred meaning or interpretation of its content. The narration is often presented by an ‘authority’ or by someone we have learned to trust (see Sir Attenborough and Morgan Freeman). The aim is quite clearly to support the validity of a point of view.

Nanook of the North (1922) directed by Robert J. Flaherty

Why We Fight (2005) directed by Eugene Jarecki

But, wait a minute. Are they ‘lying to me’? They are presenting a carefully structured sequence of arguments to support a specific perspective on a subject. Are we being lawyered? We demand the truth.

Also known as a fly on the wall approach. It attempts to capture objective reality. There is no visible influence from the filmmaker. It often relies on long takes to minimise the impact of editing and avoids the use of non-diegetic sound (sound coming from a source outside the story space).

Since nothing is staged for the camera, the camera rushes about to keep up with the action resulting in the rough, shaky and often amateur-looking footage that have characterised the Cinema Verité and/or Direct Cinema of the 50’s and 60’s. The intent is to remain hidden behind the camera, ignored by the surrounding environment and neither change nor influence the actions/events being captured.

But, wait a minute.  Are they ‘lying to me’? When you see a fly on the wall you are tempted to squash it. Your behaviour has been changed because of the filmmakers presence, sorry I meant to type: ‘the fly’. ‘Reality’ was altered by an element that has been kept hidden from the audience. We demand the truth.

Exit through the Gift Shop (2010) directed by Banksy

But, wait a minute.  Are they ‘lying to me’? They intrude into people’s lives, meddle with it, shape it, take the ‘best bits’ and assemble them to satisfy the representation of their interpretations. We demand the truth.

The Reflexive Mode acknowledges the constructed nature of documentary and displays it proudly. The presence of directions, cameras and lights is emphasised. The making of the documentary is at the centre of the documentary along the subject matter. There is an intentional display of the filmmakers activities. It strengthen the relationship between the makers and the audience and suggest a transparency. But, at the same time it gets audiences to consider and question the ways that documentaries shape the vision of reality.

But, wait a minute. Are they ‘lying to me’? The best way to hide ‘lies’ is to place them in the middle of a lot of truth. Do you believe that by showing us how the trick works we will accept everything as the a true representation of reality? We demand the truth. 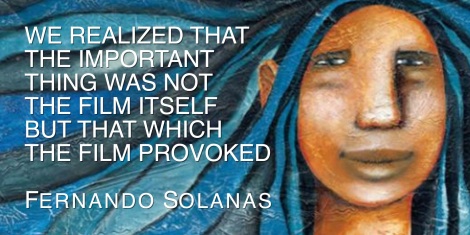 This mode emphasises the subjective nature of the documentarian and acknowledges the subjective reading of the audience; it is all about subjectivity. It is almost as if filmmakers had given up on the search for the most objective representation of the the truth and decided to concentrate on their subjective readings. The emphasis is on the emotional and social impact on the audience. The emotional complexities the filmmaker is facing are central to the film. The filmmaker’s subjective attitude or personal engagement with a subject to evoke an audience reaction is key. The documentary doesn’t show the ‘truth’, it performs it.

But, wait a minute.  Does this mean that the only truth we can show is the truth of a subjective point of view? We give up on the absolute truth.

Let’s keep in mind that these modes are not exclusives. I suspect that there is a documentary out there that could be expository in structure, self reflexive in nature, performative at heart, containing observational sequences, with participatory segments and being guilty of playing with poetic associations.  In the end the truth is that there is no truth. No, but there can be a quest.